Criminal convictions can have a devastating impact on a person’s liberties and opportunities. While many people who are charged with criminal offenses feel as if a conviction is inevitable, the State bears a high burden of proof in criminal cases. Often, there are numerous defenses that Michigan residents can assert to help them pursue a favorable outcome. If you are accused of committing a crime, you should get an attorney on your side as soon as possible. Detroit criminal lawyer Ellen Michaels at Ellen K. Michaels and Associates, PLLC can advise you on your legal rights and represent you with a strategic defense. She has substantial experience helping people charged with crimes and fights to protect their rights, she will advocate zealously on your behalf. She assists criminal defendants throughout the Detroit metro area, including in Macomb, Wayne, Oakland, and Monroe Counties.

In a criminal matter, the prosecution bears the burden of proving that a defendant committed the charged offense. Although criminal defendants are not required to prove their innocence, there are legal defense strategies that could help them avoid a conviction. For example, if the police did not follow proper procedures for stopping or searching a defendant, it may violate the person’s rights, and any evidence obtained during the investigation may be inadmissible. In other cases, a defendant may be able to offer an affirmative defense, which shows that their acts were justified.

Under Michigan law, drugs are classified into five schedules based on the risk of harm and addiction associated with their use. Crimes related to schedule 1 and 2 drugs typically carry greater penalties, but you should consult a criminal attorney in the Detroit area if you are facing any type of drug charge. People can be charged with manufacturing, distributing, or possessing drugs, depending on the type and the amount of the substance found in the person’s possession. Regardless of the specific charges, the prosecution must demonstrate that the defendant acted knowingly and intentionally.

Any acts against a household or family member that cause harm (or fear of harm) or that would cause a reasonable person to feel intimidated, threatened, terrorized, or harassed constitute domestic violence. Domestic violence crimes in Michigan may be charged as misdemeanors or felonies, depending on the facts of the case. In addition to criminal penalties, people convicted of domestic violence offenses will often be subject to restraining orders. They also may face family law consequences, such as reduced child custody rights.

Certain offenses, like aggravated assault, robbery, manslaughter, and murder, are considered violent crimes and carry significant penalties. Such crimes typically involve the use or threatened use of force. Violent crimes may lead to long prison sentences upon conviction, but an investigation of the case by a diligent Detroit criminal attorney often reveals a strong defense. For example, a defendant may be able to argue that they acted in self-defense or defense of others when they used force.

Charges classified as sex crimes include rape, criminal sexual conduct, and sexual assault. Many sex crime charges require the prosecution to show that the victim either did not consent or lacked the ability to consent to the behavior in question. Accordingly, in matters in which consent is an element, a defendant may be able to offer the defense that the activity was consensual. In other situations, a defendant may be able to show that the accuser or another prosecution witness is exaggerating or fabricating their story.

Michigan has numerous laws regulating gun ownership. For example, people with felony convictions are often barred from owning firearms, as are minors. Additionally, the laws prohibit anyone from possessing or selling certain types of weapons, selling guns without a license, and carrying guns in a school zone. Possession is a key element of many gun crimes. If the prosecution cannot establish the element of possession, the defendant should be found not guilty.

White collar crimes generally refer to offenses that involve financial theft or fraud, such as Ponzi schemes, embezzlement, and identity theft. White collar crimes are typically charged as felonies. These cases are complex and involve an extensive amount of sophisticated evidence. If the evidence was obtained without a warrant, or the police investigating the crime exceeded the scope of the warrant, the evidence may be deemed inadmissible.

Fraud involves the use of deception or misrepresentation to steal or attempt to steal property, funds, or services. Credit card fraud, check fraud, counterfeiting, forgery, and tax evasion are examples of fraud crimes. Fraud offenses may be charged as misdemeanors or felonies. An accomplished Detroit criminal lawyer might help a defendant fight this charge by showing that the alleged victim consented to the behavior in question or that the defendant lacked the required intent.

Federal crimes include offenses that violate federal laws, occur on federal property, or involve crossing state lines. If federal prosecutors suspect that a person committed a federal crime, they must present evidence to a grand jury, and they will determine if there are grounds to bring charges against the person. If the grand jury deems the evidence sufficient, the person will be indicted. After the indictment, the individual will be arrested and arraigned and will enter a plea. Federal investigators and prosecutors are bound by the same standards as those handling state crimes.

Prior to charging a person with a criminal offense, the police will typically conduct an investigation. People who are the focus of such inquiries should know and understand their rights so they can avoid potentially providing the police with incriminating evidence. For example, you have the right to remain silent if you are questioned regarding criminal activity. You are also protected against unreasonable searches and seizures. Additionally, people have a right to be represented by an attorney during criminal investigations. Ellen Michaels will protect you during an investigation and fight to prevent criminal charges.

Just because a person is charged with an offense does not mean that the prosecution will be able to obtain a conviction. If you are faced with criminal charges, it is important to speak to an attorney regarding your rights. Ellen Michaels has the skills and resources needed to obtain successful results, and she will develop a strategy designed to help you seek the best outcome possible in your case. Attorney Michaels has offices in Detroit, Bloomfield Hills, Ann Arbor, and West Bloomfield, and she is a specialist in criminal matters in Metro Detroit, Oakland, Wayne, Macomb, and Monroe Counties. You can reach her via the form online or at (248) 202-3345.

Learn More
Client Reviews
★★★★★
“I hired Ellen Michaels to represent me after I was charged with retail fraud 3 in Livonia. She was wonderful to work with, she understood my financial situation and worked with me even after others would not. She is genuinely caring and she has one of the most reassuring personalities of anyone that I have met. I was given 9 months of probation and 6 days of work program and nothing on my record. I was so fortunate to have met her.” Ashley
★★★★★
“Ellen represented my daughter when she received an MIP. She not only fought for a full dismissal, which she was able to get, but she listened to and supported my daughter throughout the process. We were so thankful for this as we live 2000 miles away and were unable to join the proceedings in person. She treated our daughter like her own, and we can not recommend her highly enough. Kind and smart! A great combo.” Nancy
★★★★★
“Ms. Michaels fought for me every step of the way. She was smart and tough. I was so grateful to have her fighting for me. I was accused of Domestic Violence and it was all lies. Ms. Michaels believed in me. She got my case dismissed because she knew the law and knew my rights. I highly recommend Ellen Michaels.” Jon
View More
Submit a Law Firm Client Review
Meet the Attorney 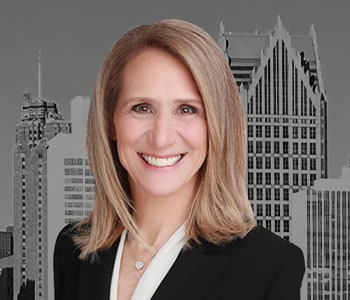 Ellen Michaels is a smart, results oriented attorney who knows that every client’s case is unique. She is also an empathic person. She understands that clients sometimes find themselves in difficult situations, and she is always respectful of every client regardless of his or her background. She also works hard to be accessible to her clients at all times. If you have any questions or concerns about your case, she will make herself available to address the issue quickly.